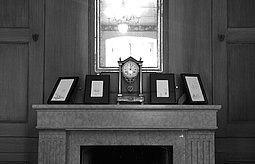 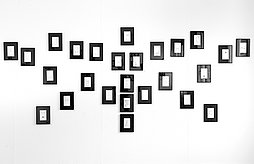 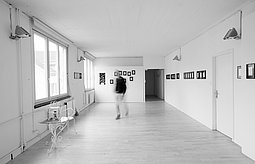 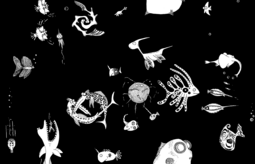 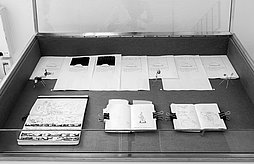 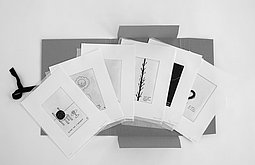 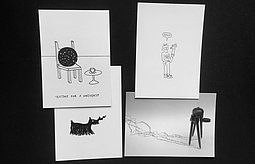 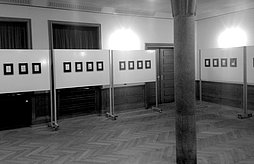 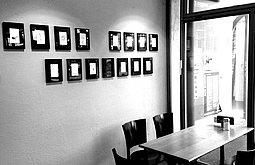 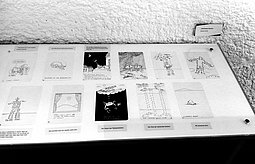 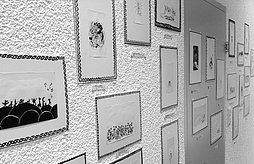 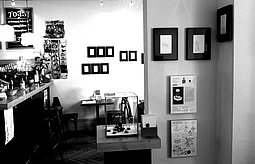 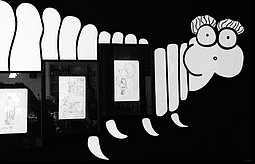 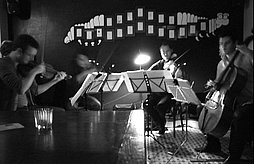 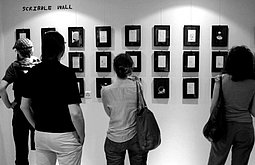 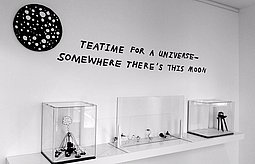 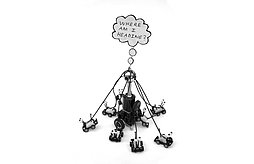 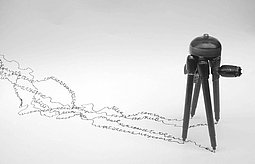 For specialists: Facts and Figures exhibitions

Microchaos. Microchaos? Just a moment. An orderly chaos like that is many things – devastating. Affecting everything, irreversible. Absolute. But one thing it is certainly not and that is – micro. On second thoughts… If there is anyone who can bring together these two extremes – chaos and micro – it’s Lawrence Grimm. After all he’s the man who has helped the universe to enjoy a nice cup of tea. Let’s remember the cartoon which has more or less become a trademark of Grimm’s work where the universe, shown as a “galactic” dotted sphere, sits on a chair with the said cup of tea on a table in front of it (picture p. 27). The message is clear: even the universe needs a break from time to time. It’s just that it has to enjoy this break alone, because it carries everything and everyone with it. Is that a sad fact? Or is it a humorous observation? It’s both, of course. And above all, it’s wonderfully strange! The immensely large gives way to the small; and thus the small and insignificant suddenly assumes gigantic proportions. We might even say vitally significant proportions.

And now the tea-slurping universe is entering a new phase. Lawrence Grimm’s second exhibition at sam scherrer contemporary gallery is called “Teatime for a Universe – Microchaos”. And once again – in Monty-Pythonesque fashion, it might be said, and this is one of Grimm’s favourite inspirations – everything revolves round the absurdities of our existence. It deals with everything that goes on in our narrow, restricted world and everything that happens beyond this world. Above all, it deals with the paradox that one thing is inseparably linked with another: self-doubt with the question of the origin and meaning of life. Confidence even in the greatest hopelessness with the occasional realization that it really doesn’t matter. Because we know for sure that the world – with or without me, and independent of the fact that I am happy or deeply unhappy – will just go on turning regardless.

So what else remains for us to do but accept this fact with open arms and a light heart? To act like the little four-eyed spider in Lawrence Grimm’s drawing “SAY YES TO CHAOS!” (picture p. 18). Instead of a web this spider has spun a hopeless muddle of silk and now hangs down, smiling contentedly. Or like the little fish which uses the stormy sea beneath as the starting-point for the jump of its life as “LORD OF STORMS” (picture p. 14). “IF YOU CAN’T FIND THE MEANING OF LIFE”, Lawrence Grimm suggests on another page, “DRAW IT” (picture p. 10). Below this heading there is a tangle of lines, patches and shapes. And below this obviously failed attempt there is the caption: “TRY AGAIN”. The universe, with or without a cup of tea, certainly wouldn’t mind.

Paulina Szczesniak was born in Poznań in 1979. She studied art history, linguistics and literature in Zurich. She writes about art, life as well as the art of living and lives with her husband and a cat near Zurich.

Lawrence Grimm, born in Zurich in 1978, is of Australian, German and Swiss nationality. After some years of acting, he studied film at the Zurich University of the Arts. His experience with visual storytelling led him to the world of cartoons and illustrations. He draws in India ink moments of life, love and loneliness. With small components and wires he also transforms his ideas into a spatial context. Lawrence Grimm’s work “Teatime for a Universe” is online. www.teatimeforauniverse.com

A Graphic Panopticon of ‘Weltschmerz’

“It’s all about hopes – fantasy, the breeze of love – slopes – the yearning for meaning, the lost-in-space syndrome – and a Universe having a cup of tea.” Lawrence Grimm

A quick look at the Facebook Profile of Lawrence Grimm shows that ‘Lawrence (Larry) Grimm’ worked at the Filmpodium (film theatre) of the City of Zurich from 2000 to 2011 and from 2003 he was active as a cartoonist for his project Teatime for a Universe. So films and cartoons are the worlds that attract and affect the artist, who was born in Zurich in 1978. What both have in common is their involvement with reality by reduction. Whereas a film has to condense a story into two hours by eliminating tedious everyday activities or irrelevant dialogues, a cartoon as a ‘satirical drawing’ leads up to the punch-line with a few pen strokes or a short caption.

Teatime for a Universe now comprises nearly 150 notebooks, with thousands of notes and ‘scribbles’, as Lawrence Grimm calls them. Individual cartoons crystallize from some of these ‘scribbles’. Done in black ink, they are deliberately linear. In most cases a caption in English is placed at the bottom and, together with the picture, forms the actual message of the cartoon. Image and text always make up the entire message. The artist describes his series of cartoons in the following way: “It’s all about life, love, loops and loners.” In spite of the fact that some cartoons with images of creatures stumbling through the infinite universe make us smile, the underlying tone is one of melancholy – this ‘Weltschmerz’, a feeling of world-weariness, affecting all of us at some time, pervades all the drawings. In this sense, the title cartoon ‘Teatime for a Universe’ (pictured on page 2) has to be understood as part of a programme. Even the universe, depicted as a sphere with its galaxies sparkling, sitting on a wooden chair, needs a tea break to find new strength. On the tea table, however, there is only one cup, not two; there is nobody to share tea with.

Lawrence Grimm’s cartoon world is not only populated by humans, animals and trees but also by quirky creatures of fantasy. Since November 2010 he has been working in the Strapazin Atelier in Zurich. In the racks and on the shelves, among books about ‘Prehistoric Animals’ and ‘Oceans’, you will find little rubber animals, ranging from a winged unicorn in kitschy colors to the three-horned Triceratops (Alliance of the Horns). These animals are all lined up with great precision. Ultimately, they are the team summoned by Grimm to capture our unfulfilled deepest desires and life’s dreams in an almost surrealistic manner.

When Lawrence Grimm’s cartoon ‘Half Way up the Infinite Tree’ (pictured on page 16) shows a disenchanted man trying to climb an infinitely tall tree, this futile act is carried to extremes in a most ingenious way: the leafless, knotty trunk with its short branches spreads from the bottom to the top of the sheet. In the very center we can spot the lonely, helpless man. The caption informs us in an almost cynical way that he has only completed half the climb to the top of the infinite tree. But that remains a somewhat impossible task because infinity cannot be divided up. The superb handling of English undoubtedly goes back to the cartoonist’s Australian roots. On the other hand, the visual realisation draws on his cinematic experience. Just as nothing is left to chance during the shooting of a film, every line has to be precise. Subtle shifts are not accidental or coincidental but a deliberate artistic decision. Grimm uses whiteout tape to make improvements and corrections during the creative process, an almost old-fashioned method. In the course of time the traces it leaves behind manifest themselves as ‘life-traces’ as the surrounding paper turns yellowish. There is always a copier close to his desk, which allows Grimm to balance variations of the composition and make minor adjustments.

Grimm calls his work a kaleidoscope, encompassing different topics that can be explored by the viewer: Art of Life, Emotion, Science, Animal, Creature, Timeline. The website of the cartoon series will link the different themes by tags so as to emphasise even more the ramification and coherence of his work, which has already acquired the character of a magnum opus.

The philosophical acerbity and depth of Teatime for a Universe inspire us to reflect extensively and to ruminate on our existence: life as a ‘mysterion’. The cartoonist shows us unmistakably that in all of us there is a yearning for meaning and love, perhaps ultimately for paradise. Access, however, in the here and now is denied us, so that our longing is unfulfilled. Nevertheless, Lawrence Grimm keeps the famous ‘loophole’ open – depending on the point of view, access to paradise stays open through this tiny gap: it follows that – from the vantage point of the man climbing the tree – there may also be a faint hope that the second half of the infinite tree can be climbed because he has already mastered the first half in spite of the laws of physics. Rudolf Velhagen 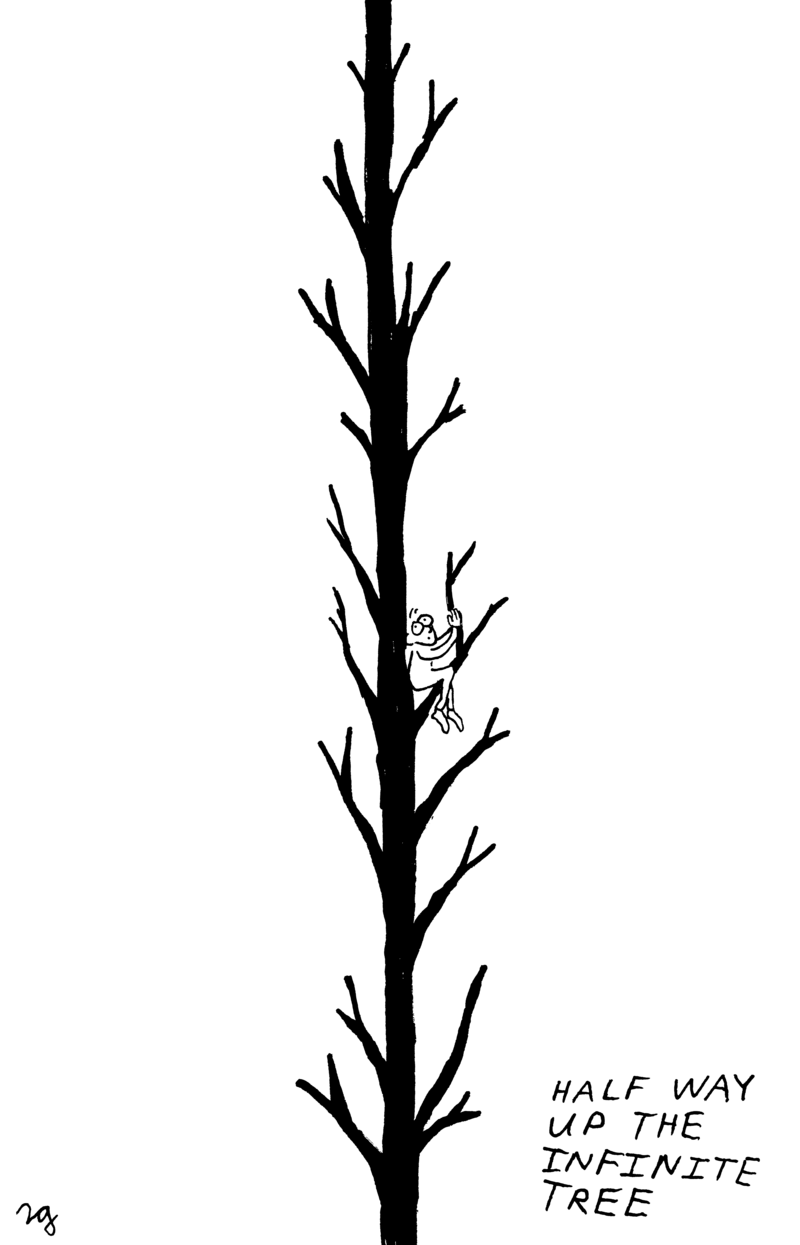 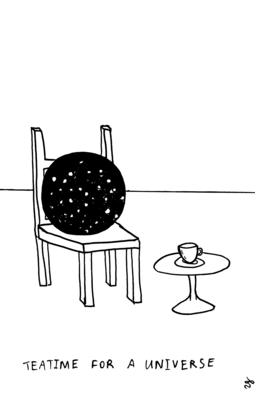 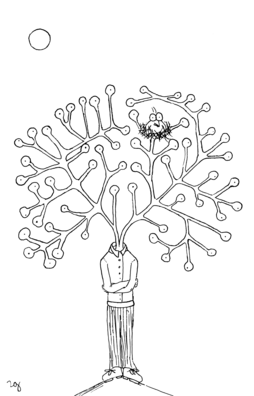 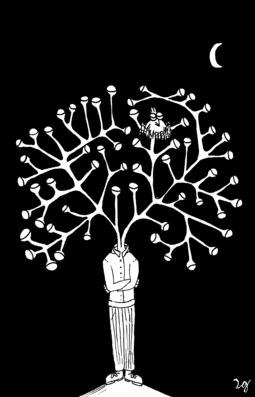 Lawrence Grimm, born 1978 in Zurich, is of Australian-German-Swiss nationality. During his school days he was very active in a youth theatre. He studied film at the Zurich University of the Arts, won several short film awards and was finalist of the Student Academy Awards with his diploma film. He transferred his experience in visual narration to the world of cartoons and illustrations. With black ink he scribbles moments of life, love, loneliness and recurrence. His cartoons have been shown at exhibitions and they are online. www.teatimeforauniverse.com 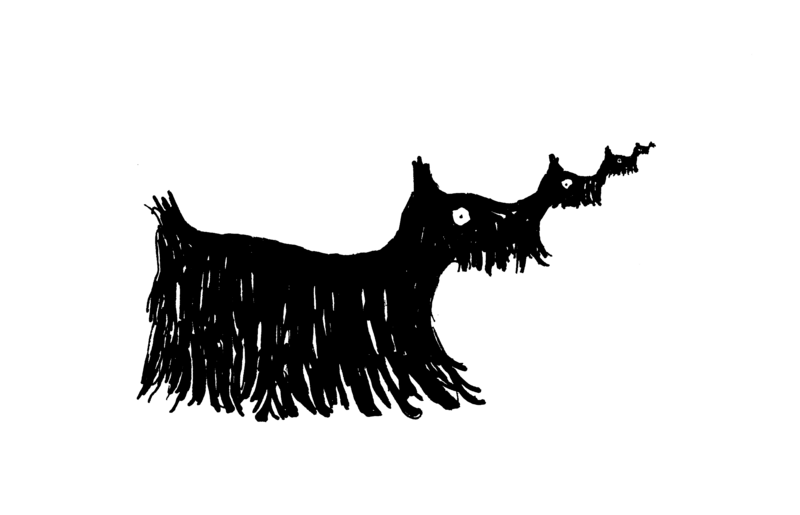 Fractality is a term of the chaos theory and describes the reappearance of identical structures within a chaotic system: no matter how much you enlarge the chaos image, similar patterns keep on returning, as, for example, in the Mandelbrot set. So if the same patterns or structures emerge at various places within an image, a feeling of unity and entity arises, because different elements describe the same content and a relationship between them is formed. This unity creates order – or even beauty, which seems to contrast with the chaos mentioned earlier. A lot of the 37 cartoons exhibited play with this paradox and sprawl between chaos and order: scribbles are dressed in coats, fish shoals multiply towards their centre and butterflies try to escape the butterfly-effect. Thereby the characters sometimes get lost in their brains, constantly philosophizing, but they also suddenly hit upon the fractal wonders, which emerge in all dimensions.